Operation's ninth successful deployment helps those most in need.

The Electrical Trades Union’s Queensland Branch has completed a successful mission to help those most in need after floods swept through Townsville.

The latest Operation Energise wrapped nearly a month after flooding hit the North Queensland area with devastating impacts for local residents who needed of a hand with their electrical connections.

ETU Organiser Wal Giordani said the “purpose of Operation Energise was to come up and help the towns community and the most disadvantage”. 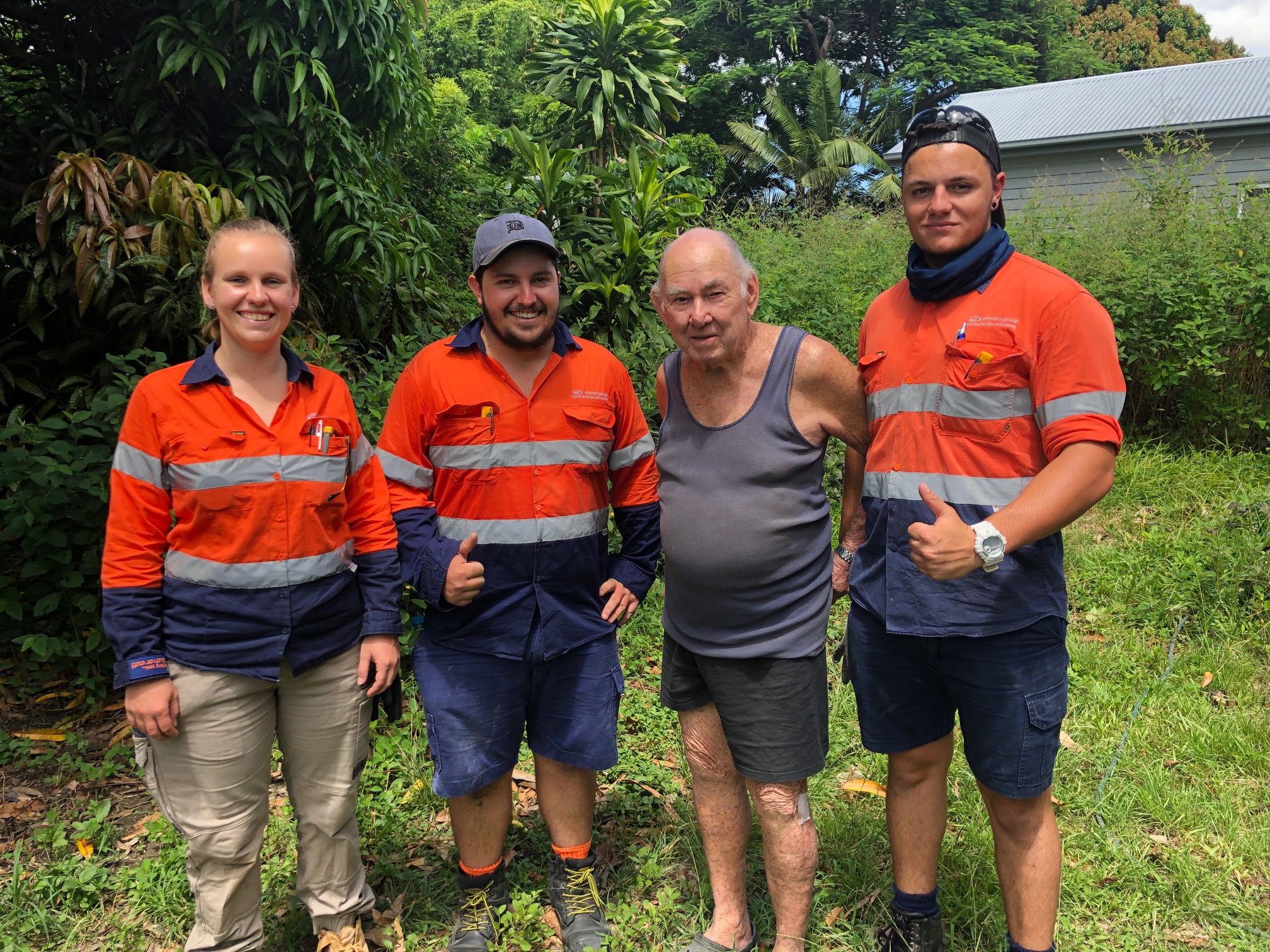 Many pensioners and disadvantaged, unemployed and uninsured, even local sports clubs were cut off from the mains due to the flooding and it was going to cost them hundreds to be reconnected.

“There were some pensioners without power for more than five days,” said Giordani.

“Many people were not aware they needed to get checked before they could back on the mains.”

Some people were quoted more than the acceptable $220 just to have someone come and check the problem. That’s where the ETU stepped up to help out.

Many of the sparkies working on the operation were from out of town, heading up from Brisbane and elsewhere to pitch in and get locals reconnected. There were also plenty of retired and semi-retired former Ergon Energy workers who raised their hands to help.

The Operation Energise crews worked through 40C heat on some days, helping reconnect homes and several sports fields back to the grid.

There were some unfortunate ETU members in the town who “lost their house, some lost their cars and some, I’d hate to think how many, also lost their tools”, said Giordani. 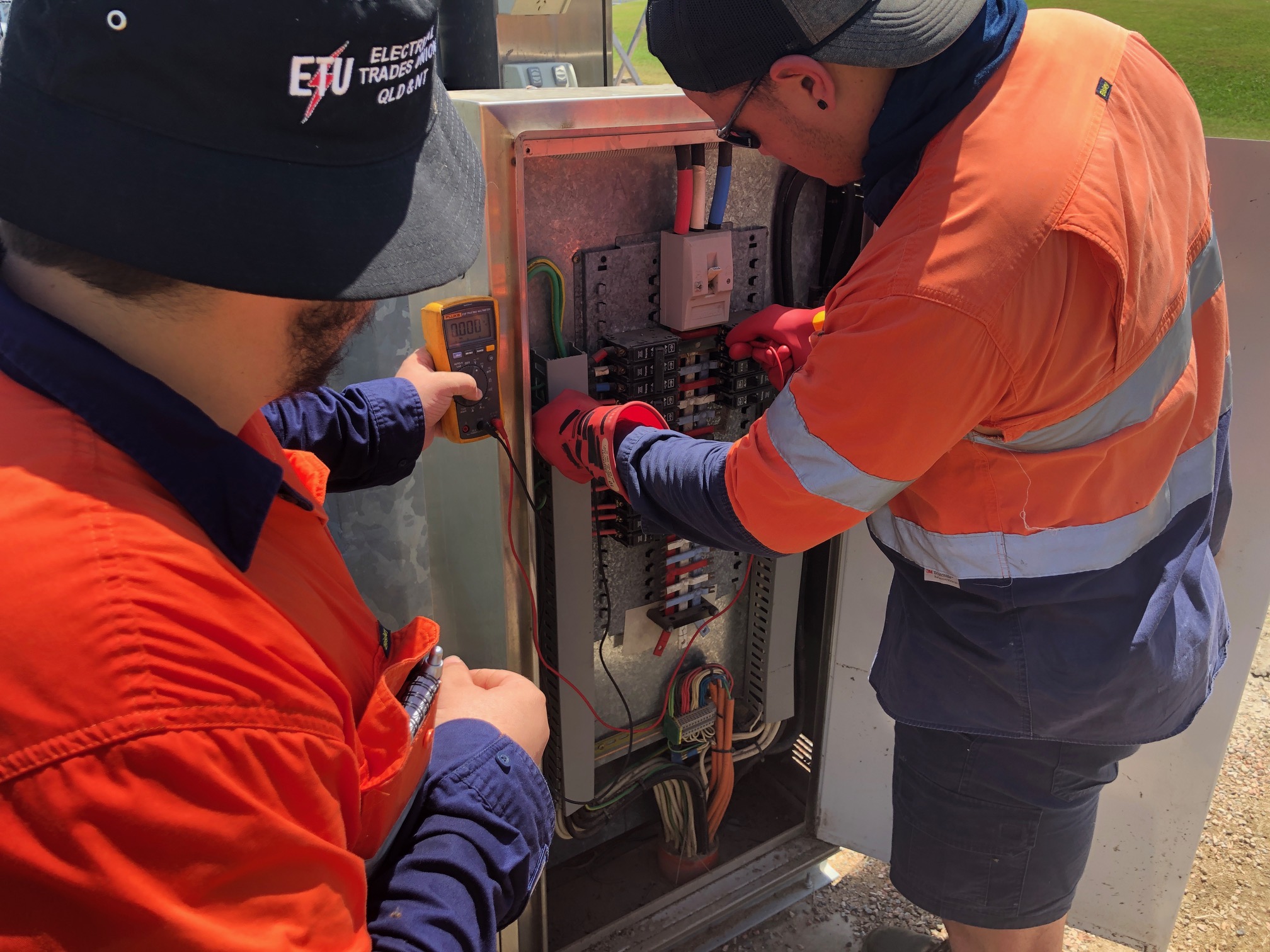 With tools sitting in the back of their work utes, the rain devastated their livelihoods as well as their homes. To help those members in dire straits, the ETU Qld/NT Branch provided several donations of up to $2000 to help them sort out their homes and work situations.

When “Operation Energise: Townsville Floods Deployment” ended in the last week of February, ETU Qld/NT Assistant Secretary Keith McKenzie said over 90 jobs had been done across the region.

“The 10 Members of this deployment is now part of history,” he said, adding the “five apprentices from Electrogroup were sensational”.

As the deployment began its two-day journey south, McKenzie said without union members, the energy companies and MPs pitching in, “these community organisation and home owners would still be struggling”.

The ETU is grateful to work of Powerlink, Electrogroup, Energy Super, Energy Qld, ETU Delegates, ETU Officials, Mates in Energy, Electrical Safety Office, the State Government, Minsters and staff as well as the various other groups who helped make the operation a success.

“You should all BE PROUD with the combined efforts and the ongoing success of Operation Energise, which has now had nine deployments,” McKenzie said.

A month on from the floods there is still debris about the place but Townsville Organiser Giordani says “the town is well and truly into the recovery mode”.

“We’re a long from being recovered, but people are starting to move on with houses being stripped out and dried out,” he said, estimating the homes worst affected are looking at 6-12 months before they can move in again.

“There is a lot of work so we’ll be making sure that unscrupulous bosses aren’t over charging or using unlicensed workers to do work that should only be done by licensed electricians and supervised apprentices,” he said.

“Again, a great effort by the ETU Qld-NT Branch and its members, the Queensland Government and industry,” he said.

“Thank you to those actively involved on the ground safely restoring power to those that needed it the most.

“Every Branch of the ETU should consider setting up a similar structure and tasking to that of the Qld/NT Operation Energise.

“Although not every state is affected by cyclones, there are floods and fires. Our union could be there for community support and after any significant event, help is always around the corner.”

Unions support their members through the bushfire crisis

The ETU was proud to support long time member Matthew Kidson with assistance from our bushfire...
Read More >

Huge win for hundreds of ETU members in WA

ECM, one of the largest electrical contracting companies in WA went bankrupt in 2019, leaving 400...
Read More >

Construction Unions Stand Up for workers’ rights during COVID-19

Unions had a win this month standing up to employer groups who tried to use the...
Read More >